Long-distance trains have contributed the largest single share of Amtrak’s revenues in every month this year since the pandemic began.

One thing that the coronavirus pandemic has revealed is just how essential America’s long-distance intercity passenger routes really are: powered by essential journeys, the so-called “money-losing long-distance routes” have contributed the largest single share of Amtrak’s revenues in every month this year since the pandemic began in March.

Throughout the pandemic the intercity routes have demonstrated the degree to which they remain "essential" transportation. Ridership has been holding up more strongly on these routes than in the rest of the system, underscoring how vital these trains are for “Flyover Country” where the options are fewer and less appealing. A look at Amtrak’s revenues and ridership since the pandemic first clobbered the U.S. transportation system tells an interesting tale.

So far, we have financial information through the end of July. During the pandemic period since March, the National Network’s routes have contributed 45% of Amtrak's revenues, compared with 21% a year ago during those same five months.

For calendar 2020 through the close of July, Amtrak's overall revenues are down 62%, a figure that would be much worse except that all three business lines showed strong gains in January and February which helped to cushion the pandemic’s blow. Since the pandemic began, Amtrak’s revenues are down 83% compared with the like period of 2019. Between March and July of 2019, Amtrak had pulled in about a billion dollars in ticket revenues; this year, between March and July total revenues came in at only $177 million.

Amtrak notes that there have been frequency reductions on state-supported and NEC routes that so far have not been duplicated on the long-distance routes, telegraphing that we can expect intercity routes’ performance to slump along with the rest of the system after the three-times weekly service model rolls out on October 1. It’s hard not to wonder whether that’s the point? A new twist on “flattening the curve”... 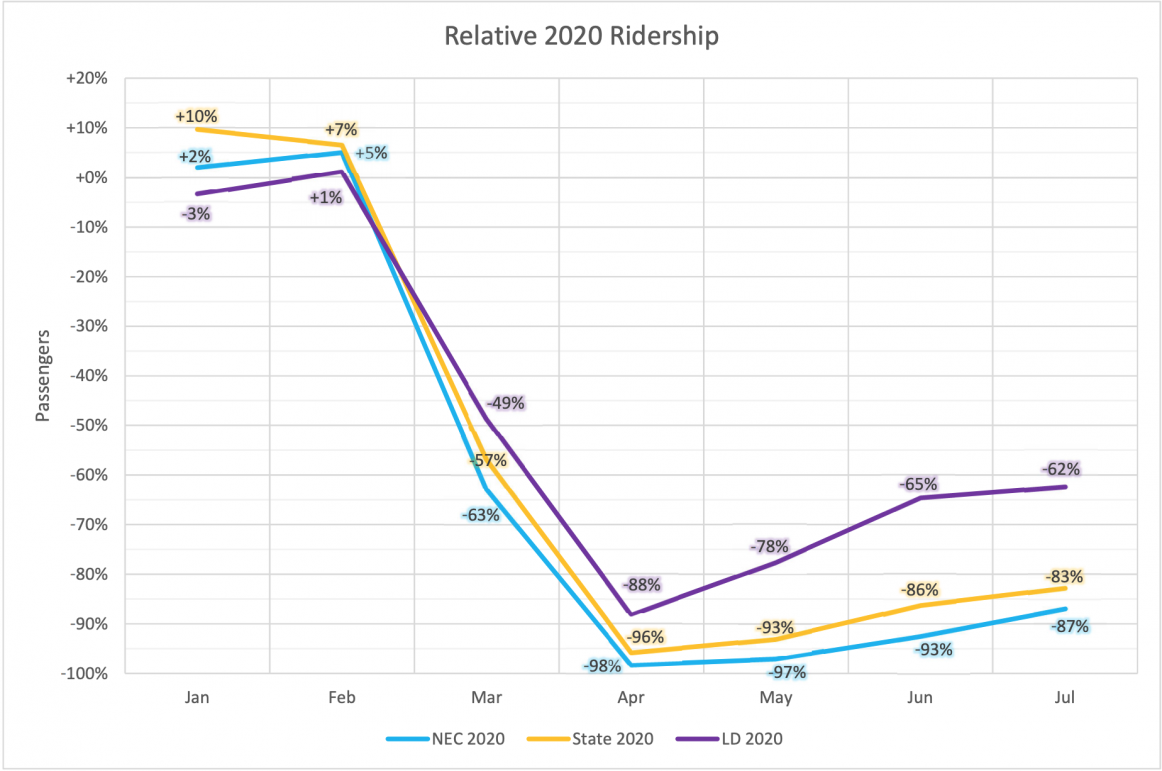 It’s been 17 years since then-Senator Kay Bailey Hutchison (R-Texas) introduced her sweeping Amtrak funding bill called the American Rail Equity Act, declaring “our motto for passenger rail is ‘National or Nothing!’” In 2003, Hutchsion and fellow Republicans like Mississippi’s Sen. Trent Lott and Montana’s Sen. Conrad Burns recognized how essential a fully functioning nationwide network of intercity passenger rail routes can be to the country’s prosperity. Today’s Congress broadly agrees and understands the numbers we’ve shared about ridership and revenues on these routes.

Democratic Rep. Dan Lipinski (Ill.), Chair of the House Transportation & Infrastructure Subcommittee on Railroads—and recipient of this year’s Rail Passengers Association Golden Spike – issued a similar condemnation. In fact, the House of Representatives has passed two bills, HR 2 and an FY2020 transportation budget, that would provide plenty of funding to maintain Amtrak service at existing levels while simultaneously banning the railroad from reducing frequencies.

Additionally, committees in both the House and the Senate are contemplating holding hearings in September to examine how the U.S. passenger rail service is weathering the coronavirus pandemic. However, the Senate has yet to act on either HR2 or the FY2020 transportation budget, and these are truly critical pieces of legislation to saving service. Each day that passes while the Senate doesn’t act increases the likelihood of 3x service becoming a reality.

While the legislators are on recess for a couple more weeks, it’s still critical that you take part in our campaign to pressure the Senate to act. Please call your Senators using the capitol switchboard—(202) 224-3121—and tell them you want to see Amtrak daily service protected. Or you can use our online platform to quickly and easily send an email to your Senators. And one call or email is not enough. You need to do this regularly and repeatedly.

"The National Association of Railroad Passengers has done yeoman work over the years and in fact if it weren’t for NARP, I'd be surprised if Amtrak were still in possession of as a large a network as they have. So they've done good work, they're very good on the factual case."