It’s going to be ugly. And Amtrak’s August performance results prove it.

“It” in this instance refers to what happens when daily trains become three-times weekly trains, or 3x for short.

Because Amtrak decided to cut the two Silver services – the Silver Star and the Silver Meteor – to 3x before the rest of the system, we’re getting a disturbing preview of what’s to come, thanks to the July and August results.

Before the 3x change, the Silvers were holding their own in the Age of COVID, both in revenue and ridership. In fact, when ranked by the degree to which monthly ridership fell compared with prior years, the Silvers were in the top half of the table. As ridership began to recover from the April troughs, some routes recovered more than others, and their declines versus the same month in 2019 were smaller. So we looked at who held up better and ranked them.

For the month of June, out of 14 National Network services the Star was in third place, behind only the Auto Train and the Texas Eagle. The Star actually edged out the very popular Empire Builder, and the Meteor wasn’t far behind in sixth place. In other words, the Silvers’ ridership declines compared with the same period a year earlier were better than those experienced on the Lake Shore, the Sunset, the Coast Starlight, the Crescent, the Zephyr, the Palmetto, the Chief, the City of New Orleans and the Cardinal.

So what happened by the end of August, when the Silvers had spent two months operating on an inconvenient 3x schedule?

The Star and the Meteor fell to dead last, losing a greater percentage of year over year ridership than any other National Network route (see tables below).

We also ranked the National Network trains by revenue performance in June (just before the ax fell on the Silvers), and then again after the August close. As you might expect, the Silvers drop down in the league table, getting closer to joining the Sunset and the Cardinal in the cellar (see tables below). 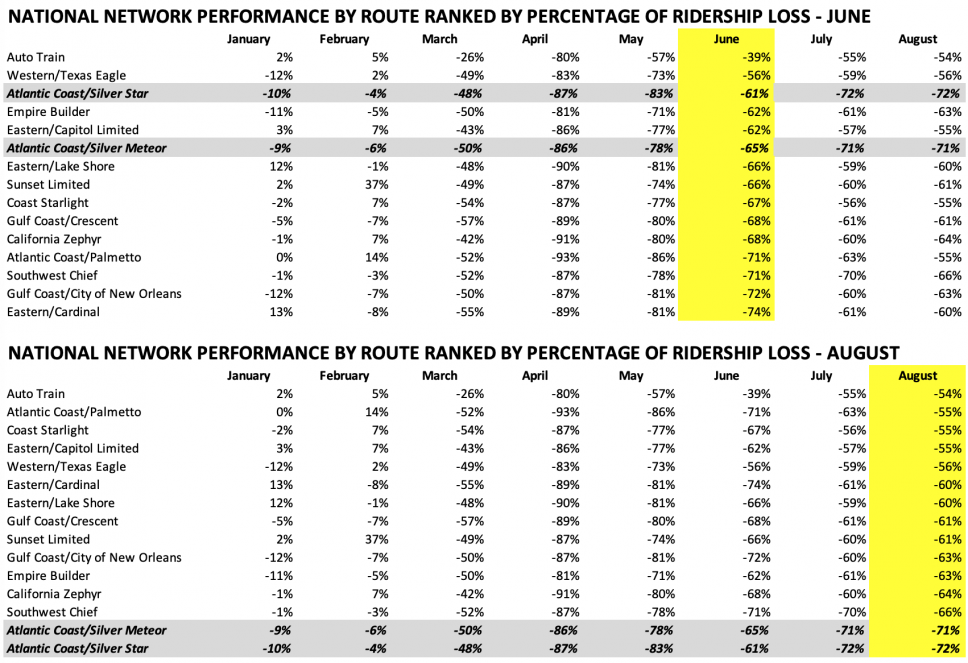 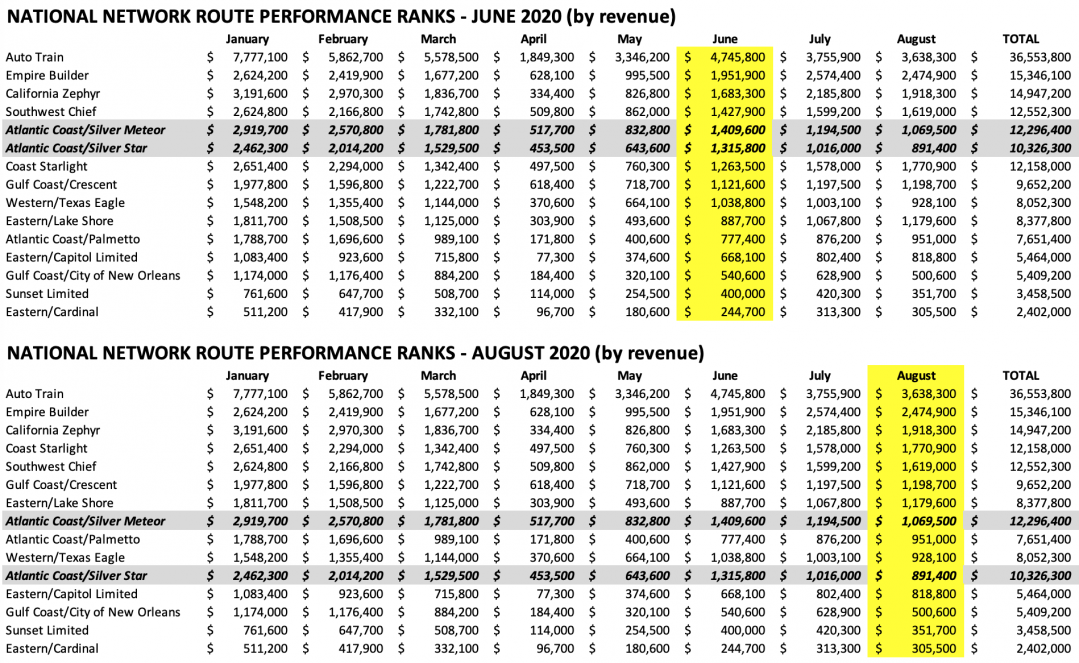 By now, everyone knows that Amtrak’s biggest revenue-generator since the coronavirus crisis began has been the long-distance trains of the National Network. Last month we told you that during the pandemic period since March, the National Network’s routes have contributed 45% of Amtrak's revenues, compared with 21% a year ago during those same five months.

Now that we have August figures, the result is the same: about half of August’s income came from the long-distance routes, where ridership declines have been the smallest – only 54% compared with close to 70% in the Northeast Corridor.

July and August have given us a preview of what happens when the rest of the National Network falls to three-times weekly service: revenue and ridership declines, at a time when Amtrak and the communities it serves can afford it the least.

I've repeatedly told reporters and lawmakers alike that it's no coincidence that the worst-performing trains in Amtrak's system are the two existing less-than-daily long-distance services. Remaking the entire National Network to emulate this failure is no solution to a temporary -- if dramatic -- decline in ridership. Working with legislators and policymakers to find a way through is the right answer. Daily service should always be the bare minimum frequency for any Amtrak-operated train, and that includes restoring daily service to the Cardinal and Sunset.

Republicans and Democrats in the House and the Senate have sat up and taken notice. In fact, Republican Sen. Steve Daines of Montana is offering an amendment to the so-called “clean” continuing resolution that would stop Amtrak from dropping daily long-distance service at least as long as the resolution is in force. We hope you support that amendment, along with other actions jostling for position in the House and Senate designed to protect Amtrak’s workforce, its daily service and the rolling stock that it needs to keep operating.

My question to you this afternoon is: have you called YOUR Senator today?

"It is an honor to be recognized by the Rail Passengers Association for my efforts to strengthen and expand America’s passenger rail. Golden spikes were once used by railroads to mark the completion of important rail projects, so I am truly grateful to receive the Golden Spike Award as a way to mark the end of a career that I’ve spent fighting to invest in our country’s rail system. As Chair of the Transportation and Infrastructure Committee, it has been my priority to bolster funding for Amtrak, increase and expand routes, look to the future by supporting high-speed projects, and improve safety, culminating in $66 billion in new funding in the Bipartisan infrastructure Law."

Representative Peter DeFazio (OR-04)
March 30, 2022, on receiving the Association's Golden Spike Award for his years of dedication and commitment to passenger rail.